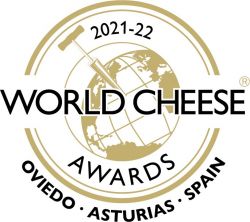 Gorwydd Caerphilly from Trethowan Brothers in North Somerset has been named Best British Cheese, sponsored by Savencia Fromage & Dairy, at the World Cheese Awards. Taking 7th place overall in this year’s competition, the traditionally made and organic raw cow’s milk cheese stood out from the crowd as entries from six continents were judged at the Palacio de Exposiciones y Congresos in Oviedo, Spain on Wednesday 3 November, during the Asturias Paraíso Natural International Cheese Festival.

In another highly successful year for the Trethowans at the World Cheese Awards, their Pitchfork Vintage Cheddar also took joint 14th place. This comes following both cheeses being named in the Top 16 at the last edition of the competition, when Pitchfork Cheddar claimed the title of Best British Cheese two years after production began at the dairy, which is based just five miles from the village of Cheddar.

Todd and Maugan Trethowan commented: “This is our 25th year of making Gorwydd Caerphilly. It has been our life’s work and we have put our heart and soul into it, so for it to be recognised as the Best British Cheese by such an esteemed group of judges means the world to us. It’s great that the complexities of these more subtle cheeses are rewarded. We think that our organic, unpasteurised milk promotes a fuller and more rounded depth of flavour. To have both our cheeses in the final 16, two years in a row, is something we and our fantastic team are extremely proud of.”

Other honours around the UK went to Arran Brie from The Island Cheese Company - Isle of Arran Cheese, which picked up the Best Scottish Cheese trophy, sponsored by Rennet & Rind, and Trefaldwyn Blue from Trefaldwyn Cheese, which was named Best Welsh Cheese, sponsored by Food & Drink Wales. In total, British cheesemakers won eight Super Gold, 15 Gold, 24 Silver and 41 Bronze awards.

The 33rd edition of the World Cheese Awards was bigger and more international than ever before, featuring over 4,000 entries for the first time. The competing cheeses represented 45 different countries, including recent additions such as India, Japan and Colombia, as well as established cheesemaking nations such as France, Italy, Spain, Switzerland and the United Kingdom.

All entries were judged in a single day, as 250 experts from 38 different countries considered their appearance, texture, aroma and flavour. Bronze, Silver, Gold and Super Gold accolades were awarded during the morning session, before the Super Golds were reassessed to find this year’s Top 16. The International Super Jury, featuring the great and good of the global cheese community, then debated the best cheeses on the planet in front of a live audience, before crowning this year’s World Champion Cheese.

For the full list of Products - See the Product Zones